Changes
After a soil test revealed high lead in all of the garden beds surrounding my house, I decided to plant in a couple of containers. If I'd had more time, I would have researched self-watering containers, since I never remember to water my plants. (I think my plants have a sinister nickname for me. Something like "The Drought-Keeper".) There's a great chapter on creating your own self-watering container in Fresh Food from Small Spaces by R.J. Ruppenthal. Next year, that's my plan. 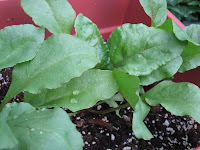 time I got around to planting, I needed to plant my chioggia beet seeds, like, YESTERDAY. So I skipped the self-watering containers, and just bought some large containers from Ricky's Flower Market in Somerville. It's everything Home Depot is not: Locally owned, friendly, expert, and helpful.

I planted the beets seeds and a couple of weeks later had nice beet seedlings. I pulled out the sickly ones and the others became gorgeous beet plants, really pretty with big leaves and red veins.

A few weeks later, I saw brown spots on some of the leaves. I also spotted something that looked like a wasp sitting on top of a leaf, and it looked like it was eating it. Is that a normal wasp thing to do? Days later, the brown spots were taking over, and by the time I pulled up the roots, the leaves were completely keeled over and crunchy. 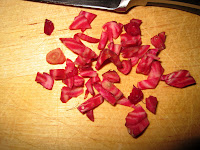 It was so sad - my beets were the size of grape tomatoes. I minced them and mixed them with a spoon of chevre goat cheese for the world's smallest beet salad. So, ok, not a huge success. Still, I planted something and actually ate the results. That's pretty cool.

Farmer's markets saved the day. Back in June, it was strawberry season, and I decided I absolutely had to make a strawberry rhubarb pie. I took the recipe straight from Joy of Cooking. I'm leery of copyright laws, so I'll just give you the ingredients: 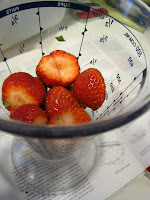 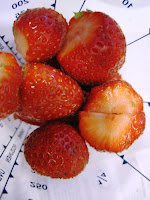 About a pound of rhubarb, washed and cut into 1/2 inch lengths 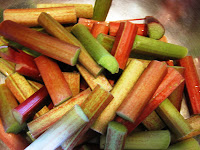 2 tablespoons butter, cut into small pieces, to sprinkle on top of the fruit

A bit of milk to brush on top for a golden crust. You can also sprinkle a bit of sugar. 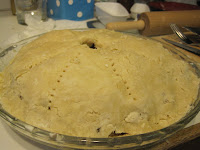 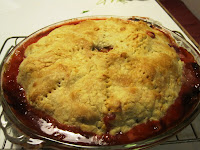