The Scent of Magnolia 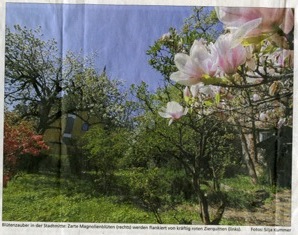 When I was about 13 years old, my sister and I were sent to live with my grandmothers in Germany for several weeks during summer vacation. It was the first time I had been so far from home for so long, and my German was terrible then. But I have several fond memories, one of which is my grandmother's garden. Rain or shine, it was beautiful. I remember brilliant flowers standing out against wet greens, sweet scents wafting indoors, the large white flowers on the magnolia tree, the little path that winds around the back, the gooseberries that became my grandmother's gooseberry pie. I would have taken that garden back to the States if I could. 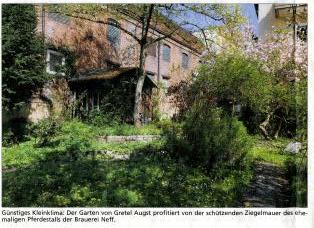 I'm not the only fan. My grandmother and her garden were featured in a full page spread in her local newspaper, the Heidenheimer Tageszeitung, on April 23rd. She talks about my grandfather's devotion to the garden, re-planting the magnolia tree over and over until the fourth tree finally made it through the winter. The garden holds memories of their time together, before he passed away 20 years ago. The fossils they collected on their many "nature walks" now line the garden path. And even though she can't work in the garden anymore, at 96, she still enjoys the changes with the seasons. Spring alone is a kaleidoscope of color:


"First the garden was yellow with winter aconite, then blue with 'scilla,' and after that white with snow bells."

I'm proud of my grandmother for what she and my grandfather built and maintained for all of these years.  Congratulations, Omi! I'd consider myself lucky if I can grow up to be like you.
Posted by ArtLover at 10:44 PM