A Garden for the House recently introduced me to winter sowing. I have never tried it before, or even heard of it. Apparently it's an easy way to sow spring vegetables, flowers, and herbs. Plant your seeds in a miniature "greenhouse," stick outside, and wait for the seeds to sprout. It sounds simple, and I like simple. So I decided to experiment. 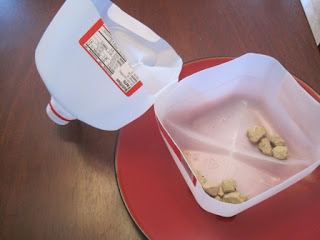 I don't usually have gallon milk containers around the house. Fortunately, my sister has a thirsty 16-month old son, so she saved a couple for me. (I believe he calls milk "daddy" as he does nearly every other object around the house.)

Begin by cutting your gallon milk container in half. I have insanely sharp kitchen knives but you can also use scissors. Leave a little bit of plastic connecting the two halves, to serve as a hinge.

Make a few drainage holes in the bottom. Kevin from A Garden for the House uses a screwdriver heated at a gas stove flame. I used my insanely sharp kitchen knives.

It's been windy in New England for the last couple of weeks, so I tossed in a few pieces of gravel to weigh down the container. 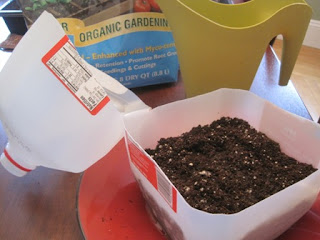 Fill your container with a couple of inches of potting mix and water well. I put my container on a plate so it wouldn't drain all over my table. 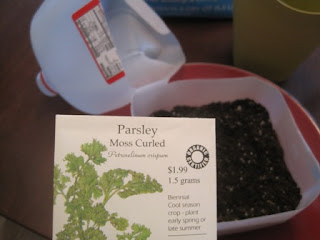 I chose two seeds for my winter sowing experiment. I've been missing fresh parsley, so that went in one of them. And I thought this method might be a good way to start alpine strawberry seeds, so fragaria vesca went in the other. 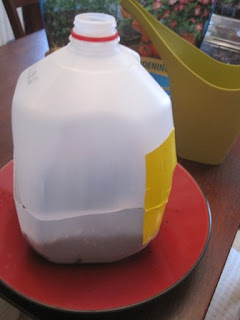 Finally, I duct taped the "greenhouse" shut. When the seedlings sprout, I'll be able to open the top half to allow more sun and air circulation and I can close it again during cold nights. 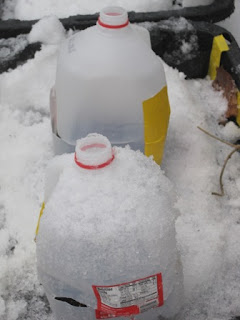 Here they are, sitting in the snow, nestled inside one of my self-watering containers. Fingers crossed, I hope this works!

Have you tried winter sowing before? How did it go?
Posted by ArtLover at 2:06 PM